You are here: Home / Projects / Turn a Mexican Train Dominoes Hub Even If You Are a Beginner 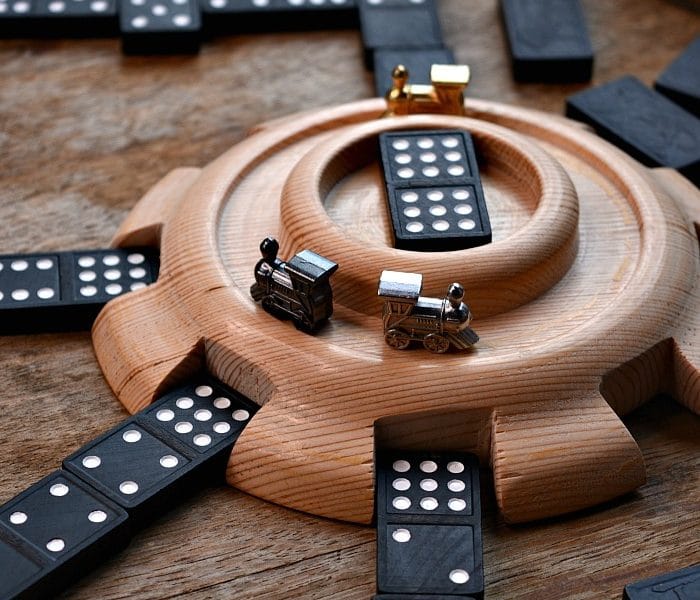 Turn a Mexican Train Dominoes hub and make dominoes more fun.  This wood turned domino train station is a little challenging because it involves some refinement after the lathe.  You’ll need some face-plate turning experience for this project, but it’s suitable for the advanced beginner.

I played dominoes when I was a child.  I don’t remember much as it was a game I played when I was younger.  That was until I discovered Mexican Train Dominoes with its domino train station.  My wife and I play this game all the time.  My version of the rules are at the end of this post.  You can download them and print them out to go with this Mexican Train train hub wood turning project.

The nice thing about a domino train station is that it provides a focal point for the game you are playing.  Turning one will make it fancy and enjoyable to play with.  It is a simple face-plate turning project with a little extra work to make the docking points for the domino trains.

Dominoes come in a wide variety of material and sizes.  This station was designed for my set of dominoes but can be adjusted easily to suit your set.

So the center portion of the station has to be able to hold a single domino.  My center circles are 2” in diameter which works for my set of dominoes.  Next is a track for the trains to be on.  This is ½” wide for this project.  Finally you need the docking stations for the individual trains.  I made two stations and used shallow docking on one and deeper docking on the other.

I turned two stations for this project.  The first is made out of cedar and the second is made with Western Larch.  With the cedar caution was needed on the reverse chucking so that the wood would not split.  I used the tail stock for extra support.  I didn’t have to do that with the larch train station.

Prepare the blank for the train station.  Starting from the center, I need 1” for the domino, ½” for the track, and 3/4” for the docking stations.  This requires a radius of 2 ¼” absolute minimum.  Therefore the diameter needs to be greater than 4 ½”.  With extra room between each item my train had a diameter of 6 ¼” or so.  So depending on the diameter of your blank you can determine how close the three elements have to be on your station.

Once you have a prepared blank of a good size then attach the face-plate to the blank. 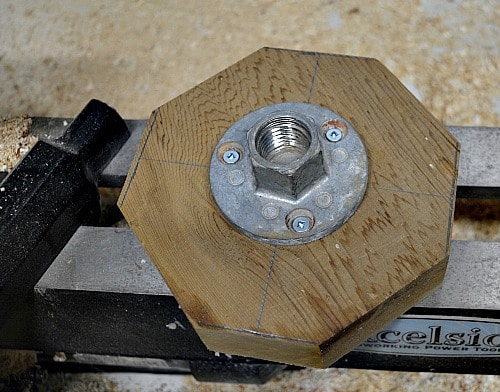 Mount the face-plate on your lathe.  Make sure you can move your tool rest banjo under the turning blank and you are not hitting the tool rest as well.  Use your bowl gouge to turn the blank round and true the front of your blank if needed. 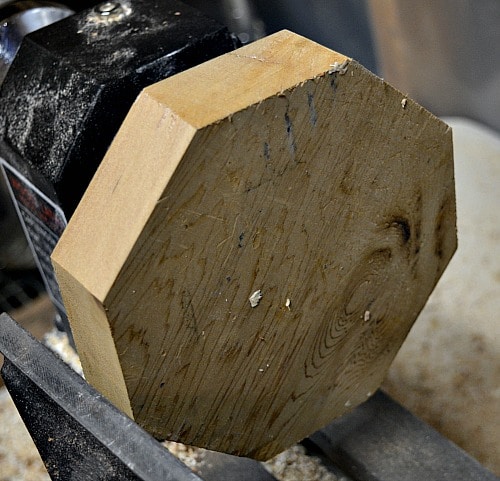 I know that the pencil lines I use when marking up the turning blank disappear very quickly but it gives me a visual reference point for where I want to place the different elements of my turning.  In this case where does the domino go and about where will the trains go. 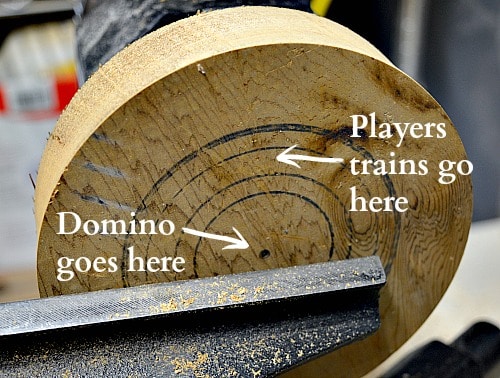 Turning the face of the train station

If you are going to use your domino to determine the diameter then you need to measure across the domino from corner to opposite corner.  That is the longest distance that the domino has.  I turned the recess with a square scraper.  The measurement was precise to these dominoes.  With the next train station I made the recess larger.  The first one had some wood movement and now the domino fits in easier in some directions than others. 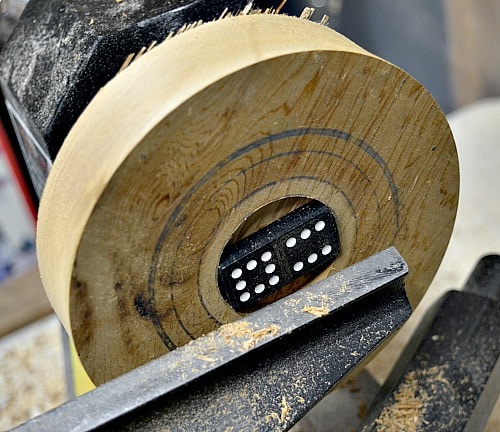 I shaped the train station to slope down to another level for the “trains” to go on.  In my case the trains will actually be perpendicular to the dominoes they are associated with.  You could make the recess larger so that the trains would point directly to the related dominoes. Shape the rest of the train station to be a pleasing progression to the ground.  You can use any shape you like.  Remember we are going to cut into this section to make the docking ports for the dominoes. 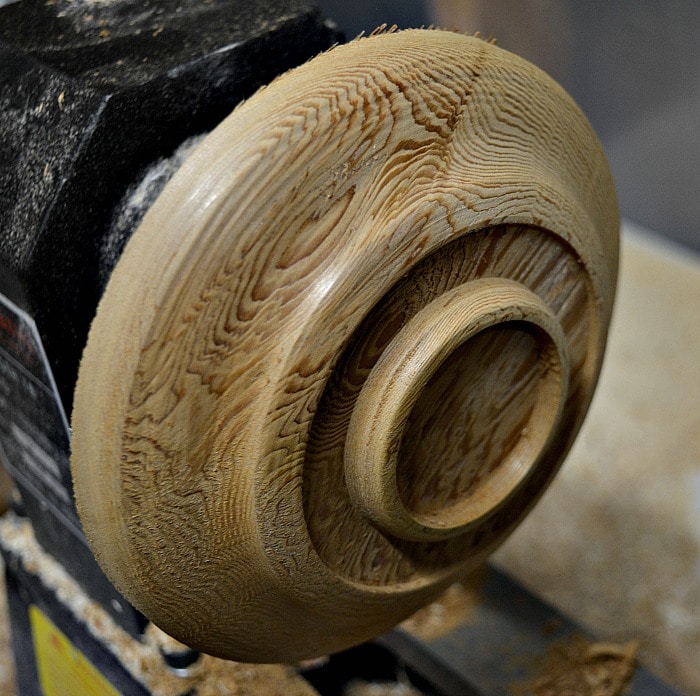 Sand the train station to your preferred level of sanding.  In my case I sanded from 220 grit down to 800 grit sandpaper.  Remember to wipe with a cloth every time you change your size of grit.  I applied carnauba wax as a final finish.  I also tried to burn circles on the train track but only succeeded in making grooves rather than black lines. 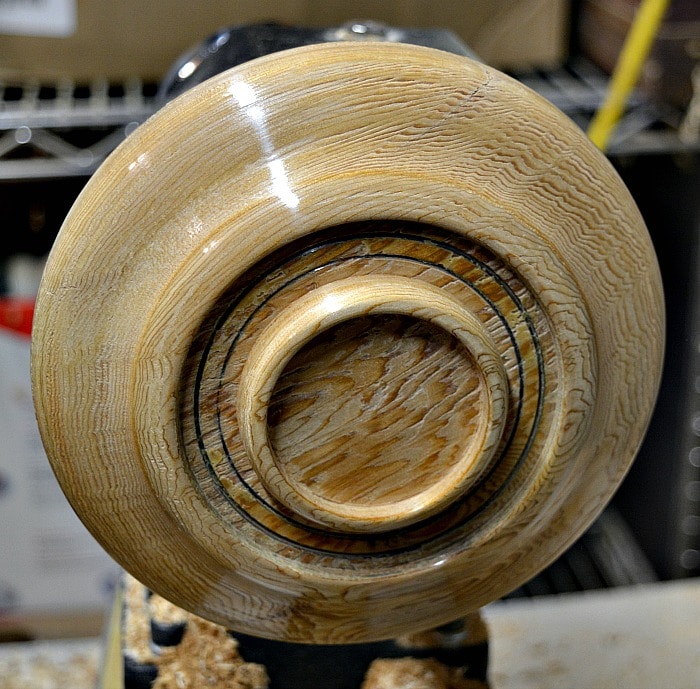 Turning the bottom of the station

Now we need to finish the bottom of the station.  With the recess for the center domino, we can easily reverse chuck the station onto the lathe.  As this station is made from cedar I carefully expand the jaws into the recess.  I don’t want to split the wood. 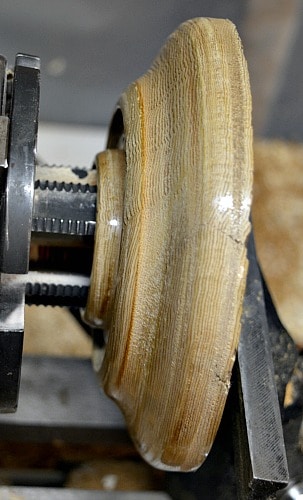 I brought the tail stock up for extra support as I hollowed out the station.  While I didn’t take a picture it is the same procedure that I used here on turning a small bowl to hold rings, and in making a bird feeder. 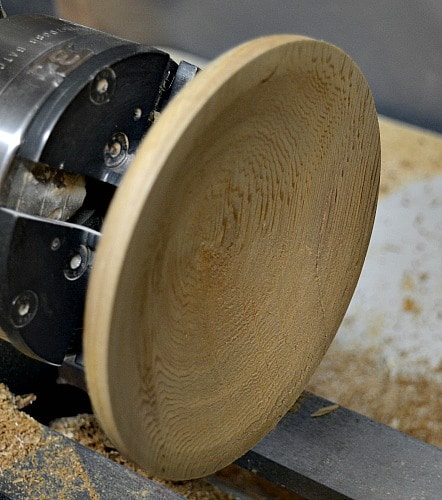 At this point I made a design error.  I forgot that the docking ports for the players’ dominoes were going to go into the station between ¾” and 1”.  The rim ended up being only about ½” thick.  If I had made the docking ports like I wanted to there would have been a hole at each one.  So on the cedar station I made shallow docking ports. 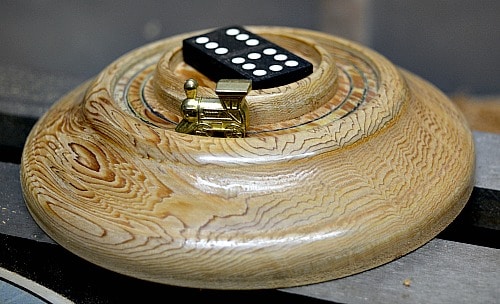 The cedar domino train station is off the lathe and ready for making the docking ports.  I think the cedar grain looks pretty good.

I quickly took a prepared piece of Western Larch, attached a face-plate to it and turned a second Mexican train station.  This is very similar to the cedar one. 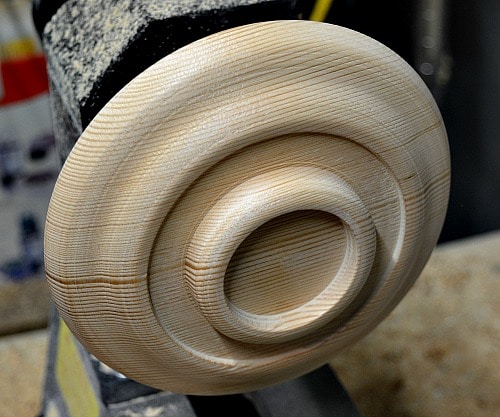 So here we have the recess for the domino and for the trains all made and the general shape ready to go. 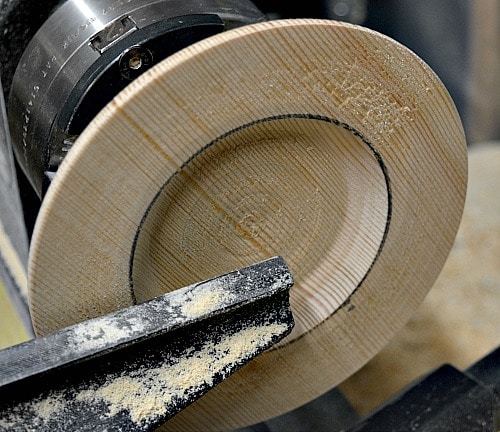 This is the hollowed bottom of the larch station.  You can see that the rim is much wider.  This will allow me to make deeper docking ports.

How to make the docking ports

With the cedar station I tried to measure and mark the bottom of the blank while it was on the lathe.  It really didn’t work that well and the spacing was close but definitely not equal.  Then I had an insight!

Take your turning and mark the circumference of the station on a blank piece of paper.  Cut the paper into a circle.  Fold the paper in half three times and cut out your docking station on the fold.  Since you are going to unfold this paper the width of the cut is ½ the width of your dominoes, with the length or depth of the cut is how deep you want to make the docking port. 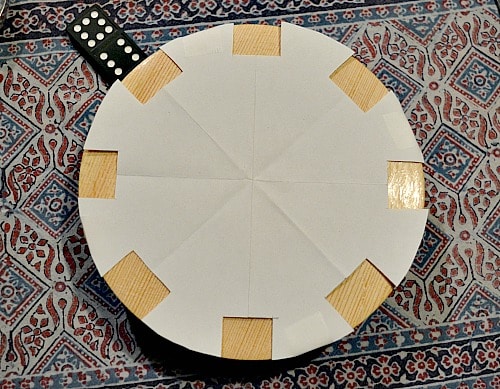 I taped the template to the turning, made a jig out of plywood to support the station, and notched out the docking ports with my band saw.  Then I trimmed each port with a whittling knife and went through the sanding procedure to finish the project.  There is nothing too exciting about this process.  Clean out one docking port and repeat 7 more times!

The making of a Domino Mexican Train Station takes a bit of planning, to suit your dominoes, some fairly straight forward faceplate turning and a little bit of regular woodworking to make the 8 docking ports on the station. 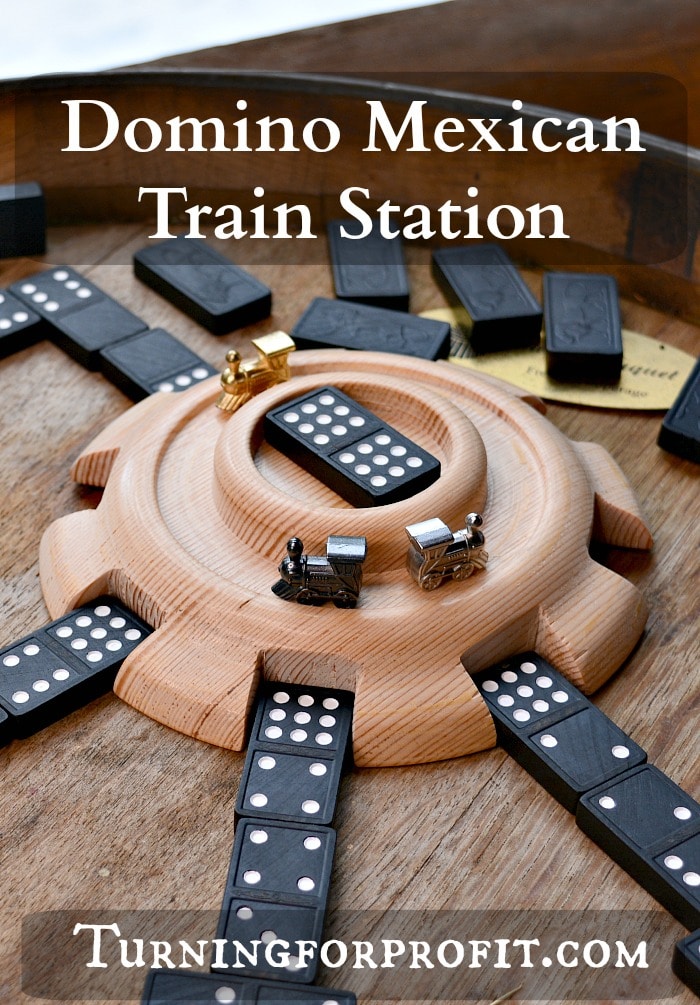 This looks pretty good and you are set up and ready to go for a game of Mexican Train Dominoes.  There are a lot of different rules for playing dominoes with a Mexican Train motif.  You can find several examples here. These rules are very basic and you can adjust them as needed for your circumstances, playing partners, and age of players, size of your domino set, etc.

Setting up the game

Prepare the game by placing all the dominoes face down except the double nines.  Each player gets a train or token.  You will need one more train or token for the Mexican train.

Initially each players train is closed.

If a player cannot play on their own train, the Mexican train, or another player’s open train then they must place a train on the station at the head of their tiles.  Their train is now open.
Each person picks up ten dominoes.

You only play one tile at a time (except for doubles see below).

Pick a person to start the round.  (next round starts with the next person)

Organize your tiles and start by matching the number on the tile in the station.

On the first turn each player tries to start their own train.

When a person cannot play any tile from their hand they have to pick up a tile.  If they can play that tile, they do so and play continues.  If they can’t make a play then their train becomes open (or remains open).

Playing a double.  Double tiles are turned perpendicular to the train.  You can play as many doubles as you want where you can legitimately play.  Usually that means your train and the Mexican train.  If another player’s train is open you can play a double there as well.  Your last tile in your turn must be a non-double.  If you finish with a double and can’t play from your hand you have to pick up a tile and try to play that one.

When a double is played it must be finished by either the person who played the tile or the first player who has a tile that matches the double.  In otherwords you can’t play anywhere else except the double until it is closed.  If more than one double is open they must be closed in the order that they were played.

When you play a tile and you only have one left you are to alert the other players that you are about to go out by tapping your last domino on the table.  If you do not tap then you have to pick up another domino before you can go out.

The round is over when one player plays their last tile.  It is also over when all the tiles have been picked up and no one can make a play.

We do not keep score since it is just the two of us.  To keep score, at the end of each round, you tally up the pips on the dominoes remaining in each player’s hand.  With the double nine set you will play ten rounds.  The player with the lowest score wins.  We did not give the double blank any extra value when we did keep score.

My wife and I follow these rules and have a great time relaxing with each other, enjoying coffee, and a game of dominoes.  We aren’t very competitive though.  It’s how we’ve stayed together for 38 years.  (Happy wife. Happy life.) But, if you like lots of high energy competition you may enjoy the double 12 set and a score pad for added fun.

This was a good challenging project that turned out quite nicely.  What games have you turned, all or a portion of, on your lathe?  Leave a comment below.  Thanks. 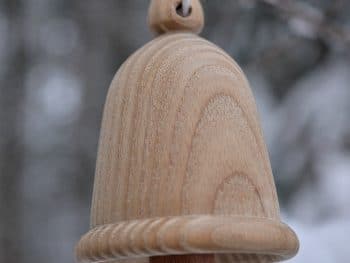